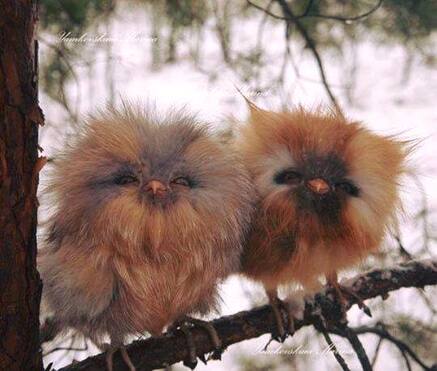 Olly and Mildred first met right, on that medium sized branch with snow capped pine needles and smiling eyes. Now, 10 years later, they are an elderly couple. Olly's hair is falling out from the stress of dealing with Mildred. She's a peach though, loves bingo and does a lot for the community, a bit of a gossip too- Always asking, whose who..?!

All that talk though was originally what attracted Olly to Mildred. He loved her spirit and still does but looks forward to the quiet sometimes. Olly keeps more to himself, he's a bit of a loner and quiet, he's wise and more focused. He stands by her though and occasionally will have a scotch or two and smokes cigars on the side. Not in front of her though, she'd smack the cigar right out of his curved beak! So, he goes off by himself or with the guys, it helps keep his mind off of going bald.

Olly is a carpenter and mason who own's a nesting company called, "Nest in Peace." Every morning he meets Fox and Squirrel at the local meeting stump and every evening, when Olly comes home he picks a yellow daisy for Mildred, daisies are her favorite. Their meetings usually end when Mildred wakes, turns her head 260 degrees and yells out, "Who... Who's out there!? Oliver Owl, you better come home!"

Fox, Mr. Pendelton B. Fox the 3rd has a beard and wears a bandanna. Mr. Pendleton just likes to be called Fox though.. Even though he's a bit of a snobbish, know-it-all he has a heart of gold but he'll never admit to it. He likes to think he's a bad-ass and he really puts it on thick too- Olly often wonders if Fox will ever get himself a gold tooth!

Everyone in Nest Circle just call's Ralph, Squirrel. He's nuts and never stays in one spot. You have to keep your eye on him too, otherwise, BAM! He'll run right into you, face first! Ralph does the grunt work, gathers all the sticks and leaves when he's building a nest job and Fox, is sort of the creative director. He tells Squirrel what to do, when and how.

The guys aren't allowed in Olly's tree house, Mildred will have none of it! She keeps a clean tree cavity and the whole forest knows not to mess with her. She's a fun loving, chocolate chip cookie baking, fuzzy ball of baby bunnies but she has a sharp screech, talons like Ginsu knives and an even quicker mind. She can talk an Eskimo into buying snow and when she does, boy she means business.

Occasionally, Mildred will do the marketing and sales for Olly's nesting business but mostly, Milli runs the day-care center for all the little critters in the forest. Every morning she has breakfast for the little baby animals and Olly's lunch is always packed and ready to go.

Olly brings his tin lunch box with him every day when he leaves to meet the guys. Every morning, Mildred packs it for him full of healthy food and love. He makes sure he has it with him at all times until fox comes..

Fox walks slow and with purpose, a little shifty but harmless and always has a cigar and a little dirty snack for Olly under his yellow and burnt red bandanna. Olly never expects it but everyday, he waits for it. Squirrel does too because if Fox has a little dirty snack for Olly, then Squirrel gets Olly's homemade lunch full of love- a sandwich and sweet potato pie and he CAN'T WAIT!! He doesn't stop yapping the whole way there.

Fox just barely tolerates him but Squirrel doesn't shut up, just talks and talks and talks and squirts around so fast, he bumps repeatedly into trees while they head to the meeting stump. Head first, every morning, SMACK! Tree after tree and he just keeps going... Just chuckles about, clipped and wild then shakes it off like it was nothing.

​Fox just shakes his head slowly and every once in a while, he'll throw a stick to the side and call out, "Sweet Potato Pie!" Just to see Squirrel's eyes bug out of his head, veer off the trail and run for it! Fox always hopes Squirrel won't come back but he's also secretly happy each time he does, yammering back how Fox is too sly for him! That gives Fox a good chuckle or two, every time. He gets a kick out of Squirrel and Squirrel, well, he gets a kick out of everything! Olly on the other hand, he has plans to make...

To Be Continued..?
​
J. Circosta
Olly and Mildred, ©2017
First Draft-
"Olly and Mildred" is a short story written by the collaborative, creative minds of Jennifer Circosta and Chris Wood.